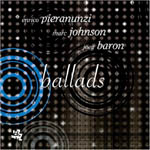 The simplest stories often reveal the greatest depth. So, too, can the simplest songs yield richer meaning. Italian pianist Enrico Pieranunzi makes that abundantly clear with Ballads, an album so gentle it can almost pass by unnoticed. But pay attention and what may appear to be a collection of easy-on-the-ears songs prove to be much more.

Pieranunzi has worked with bassist Marc Johnson and drummer Joey Baron before, most notably on Plays Morricone (Cam Jazz, 2005). In recent years Johnson and Baron have become regular rhythm section partners, working with artists like John Abercrombie and John Taylor. With Pieranunzi the lineage to the late pianist Bill Evans is clear, and given Johnson's place in Evans' last trio before his death, it seems almost inevitable. This group, Pieranunzi's so-called American Trio, manifests the same sense of interplay, but on a level so subtle that it's more felt than heard.

The programme is a mix of six Pieranunzi originals and one tune each by Baron, Billy Strayhorn, and three lesser-known composers. Luigi Tenco's poignant "Mi Sono Innamorator de Te" is the same song that Pieranunzi used to lead off his tribute to the late singer/poet/composer, Danza Di Una Ninfa (EGEA, 2005), and it sets the mood for the entire record. Pieranunzi avoids the radical reharmonizations that have become so commonplace these days; his deep reverence for the song makes it all the more significant when, during his solo, he subtly builds the intensity with a series of syncopated chords. Johnson and Baron remain in perfect synchronicity, responding to Pieranunzi while retaining the understated elegance that defines the tune.

Strayhorn's "A Flower is a Lovesome Thing" receives the respect it deserves, but its familiar theme is imbued with new meaning in an almost classical approach that relies on subtle nuance and delicately altered phrasing, rather than dramatic interpretation. Johnson and Baron seem forever poised on the verge of a slow swing during Pieranunzi's lyrical solo, but they create a lovely tension by never quite getting there.

Throughout Ballads, Johnson's robust yet delicately lyrical playing makes for some of the most memorable moments. And Baron, who emerged out of the downtown New York scene as a player who's comfortable in any setting, is especially attuned to Johnson's dichotomous yet focused approach.

Like Johnson and Baron, Pieranunzi is capable of much more. But as with guitarist Jim Hall—with whom he collaborated on Duologues (Cam Jazz, 2005)—the song's the thing. His own melodic writing dovetails perfectly with the sourced material. Ballads may not appeal to listeners who are looking for edginess or complexity in their music, but its unassuming stance and sheer honesty make it a meaningful listen for those who are prepared to look beyond its soft veneer.

Mi Sono Innamorato di Te; These Foolish Things; When I Think of You; A Flower if a Lovesome Thing; The Heart of a Child; Sundays; Thought; Night After Night; When All was Chet; Miradas; Cabiria's Dream.