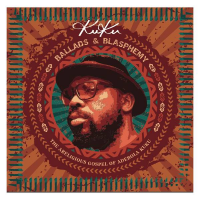 Yorubaland is a region of southwest Nigeria which extends into parts of Benin and Togo. It is the ancestral homeland of the Yoruba people, and remains a vital source of cultural identity, especially spiritual music and rhythms. Kuku is a singer/songwriter who though born in the United States, is a Yoruba Nigerian, now residing in Paris. He has been in a cross-cultural existence his whole life, brought to light in his 2012 release "Soldier of Peace." Ballads & Blasphemy finds him melodically traveling those embryonic currents connecting his Yoruba heritage to his modern life in America and Europe.

Kuku sings in several languages, but his message is straight and to the point, that a lot of what is wrong in the present world has its beginnings in the past, and man has been culpable of his own ruination. He intentionally questions the religious dogmas and offers answers or observations on what might be a more ethical solution. His songs are categorized as gospels, from the perspective that anyone, especially a singer, can be a preacher, and he has a valid point.

There is a disclosed Fela Kuti influence, which is understandable since Kuti is the most famous Nigerian musician in history, whose shadow is vast and enduring. "Wáya" features Kuti's drummer Tony Allen and tells of the African family pressures on marriage and finding a spouse. Allen again appears on "Owó," a laid back tale of how money has become man's god. "Evildoers," and "Your Eyes While You Pray," are self-explanatory on how much evil and violence is done under a religious guise, and one must be aware of false prophets.

It is on the homages to his homeland as in "Ekó," which was the ancestral name for Lagos, and "Africa Jomí Lojú," that Kuku comes into his own, praising Africa for what is rightfully African, and all that it entails. "La Derniére Fois," is reminiscent of the call and response hymn "Wade in the Water," save for its hypnotic drumming, which is pure Yoruba. But his most poignant song is arguably "Is It All A Game," with the title being the question he asks on life situations for the common man.

Ballads & Blasphemy is a record that requires several listening sessions to get a proper feel from where Kuku is coming from. He submits a philosophical concept on how humanity could certainly use some improvements, and does it within the musical framework of the Yoruba culture. He speaks and sings from the heart of an African who has straddled the ocean and seen life from both sides. He recognizes the problems the world shares, and provides his songs as solutions or remedies, and there's nothing wrong with that.