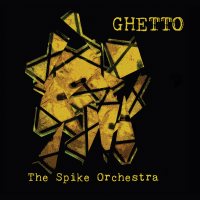 What does it mean to make jazz records halfway through the second decade of the 21st Century? Can there still be a place at the cutting edge for an art form whose commercial peak was in the 1950s and which the majority of the population still associate with the middle of the road vocal records of that time? It doesn't help that our major labels are content to churn out ever more 'expanded,' 'ultimate' and 'complete' curatorial reissues of the ever present past, that has been an unexpected side effect of the digital era, crowding out new artists from release schedules and marketing budgets. But then amongst living musicians there are far too many 'Sinatras in corduroy' without the vision to step beyond recycling the show tunes of their grandparents' era, pushing the music into almost total irrelevance. For many it seems that jazz is a harmless hobby, like maybe beer mat collecting, that says nothing about the real emotions or issues that impact upon our lives, more a painless pursuit that allows just a little self-aggrandisement within a cosy, comfortable, clique.

In this climate the Spike Orchestra, a flexible collective organised around the duo of Sam Eastmond and Nikki Franklin, are a breath of fresh air. They feature a rotating cast of musicians that can expand to up to twenty others where the piece demands. For this entirely self-financed and publicised work, the subject matter of the 1943 Warsaw Ghetto uprising is unusual, weighty and about as far from 'I Got Rhythm' as it is possible to get. Any initial concern that this might prove hard work or difficult listening however evaporates under the emotional pull of the music—Eastmond has been led to believe that he had family inside the Ghetto and it shows. First impressions are driven by the effectiveness of the switching between formats from the widescreen orchestral set pieces to the six piece 'Spiketet' or the more intimate duo pieces featuring Eastmond and Franklin. It feels as if the Orchestra is taking you on a fast cut ride through archive footage, zooming in and highlighting incidents or individual stories along the way, emphasising the indefatigable human spirit of those trapped and, by implication, the loss to the world through their premature passing.

The orchestral pieces have echoes of many influences, Ellington, Gil Evans, Gershwin perhaps, but it is the blend with other musics such as the incorporation of Klezmer into "Construction" that lifts this into something different and unique. Both these and the duo pieces blend Franklin's vocal exclamations and punctuations with Eastmond's trumpet into an effect that is always emotional, moving, if nigh on impossible to analyse. Maybe that is the point—these days we can all read of the horrors of the 1943 Uprising at the click of a mouse, but only music and music of this quality to boot, can make us feel more than words or bland facts. So I could tell you that average daily food rations in 1941 for Jews in Warsaw were just 184 calories, compared to 699 calories for gentile Poles and 2,613 calories for Germans—but you will better understand the implications by listening to Franklin and Eastmond on the duo piece "Starvation."

Within the orchestral pieces the use of unusual instruments such as the accordion and bass clarinet give a different feel to the music "Underground," for example, develops from an invigorating conversation between the brass into a tense stepping rhythm, that sounds like a damped guitar. This use of rhythm is important too in "Trains," the understated guitar and accordion combination under Nick Blake's excellent sax solo being particularly effective. Mention must also be made of Sam Leak's evocative keyboard solo on the concluding piece "Uprising"—the Rhodes sound perfectly judged between distortion and the interaction with the brass stabs that punctuate it.

Perhaps the nearest parallel in recent times has been Darcey James Argue's Brooklyn Babylon, that shares a breadth of vision and desire not to settle for the commonplace more than any tangible musical similarities. With major label assistance this album would be a significant achievement for the Spike Orchestra, on an indie in these timorous times it is a remarkable single minded triumph. In short Ghetto is an extraordinary hidden jewel and as such is highly recommended.