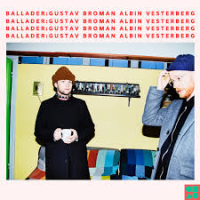 Bassist Gustav Broman and guitarist Albin Vesterberg are two young Swedish musicians who have been playing together for several years. This CD, a set of intriguing ballad variations, marks the first recorded evidence of their partnership. It shows them to be talented players who work very well together.

The original compositions all use the standard "For All We Know" as a reference point, but without any discernible trace of that melody. On most pieces Vesterberg plays guitar with measured sensitivity, sparingly rolling out romantic themes as Broman's bass supports, and sometimes intertwines with, his picking. "Low Life" achieves a particularly resonant beauty in its mix of careful guitar strumming and subtly harmonized bass. Vesterberg plays sliding notes on "Aurora" with a stillness that recalls Ralph Towner, and "Dear Works Dear Works" develops a blossoming melody with folkish phrases which dissolve into silence. "10" is the one stark exception to the overall ambiance. This track is played at a brisk tempo; Broman's bass rumbles funkily while Vesterberg plays gnarled single-note patterns which veer into Derek Bailey territory.

At the end of the set, "For All We Know" itself shows up, played tenderly with aching slowness. Vesterberg traces out the melody while Broman plucks stately supporting notes for one brief chorus before they both disappear. This set demonstrates the excellent rapport Vesterbeg and Broman have developed. They can explore low-key, melancholy moods with delicacy and adventure at the same time. Hopefully, though, their next recording will feature more pieces like "10" which show what they can do when they feel a little rambunctious.