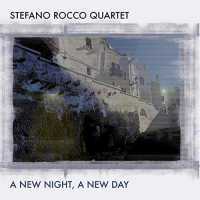 Sydney, Australia-based Italian guitarist Stefano Rocco may not be a familiar name to most jazz audiences, especially without a discography of his own. Well, that now changes with the launch of his debut album as leader, the crisp and audacious A New Night, A New Day. After studies at Middlesex University, London and playing as a sideman in the local music scene, he relocated to Sydney armed with a degree in Jazz and quickly began to immerse himself in the jazz scene, forming the Syd Side Trio and, in 2020, releasing this album.

Rocco draws from Sydney's rich pool of talented musicians to form a new rhythm section, a quartet of players that includes Muhamed Mehmedbasic on double bass, Nick Southcott on the keys and Ed Rodrigues on the drums, forming a band ideal for presenting seven original compositions of light, rhythm-based jazz of wide appeal.

Designed to impress from the start and eschewing the old adage "save the best for last," Rocco opens the album with his best four compositions: "Ready, Steady," "Moon By the Sea," and the title tracks, "A New Night" and "A New Day." This is not to suggest that the remaining tunes are unworthy, for they are indeed.

The remaining "Morning Blues, ""Old Carillon and "Summer Storm" are as engaging as the opening songs. While the pianist, bassist and the drummer each have their brief solo moments, it's the leader who emerges as the primary voice of the group.

No question about this debut, A New Night, A New Day is an impressive foundation from which to grow. Guitarist Stefano Rocco delivers a sparkling gem of an album sure to garnish critical acclaim.