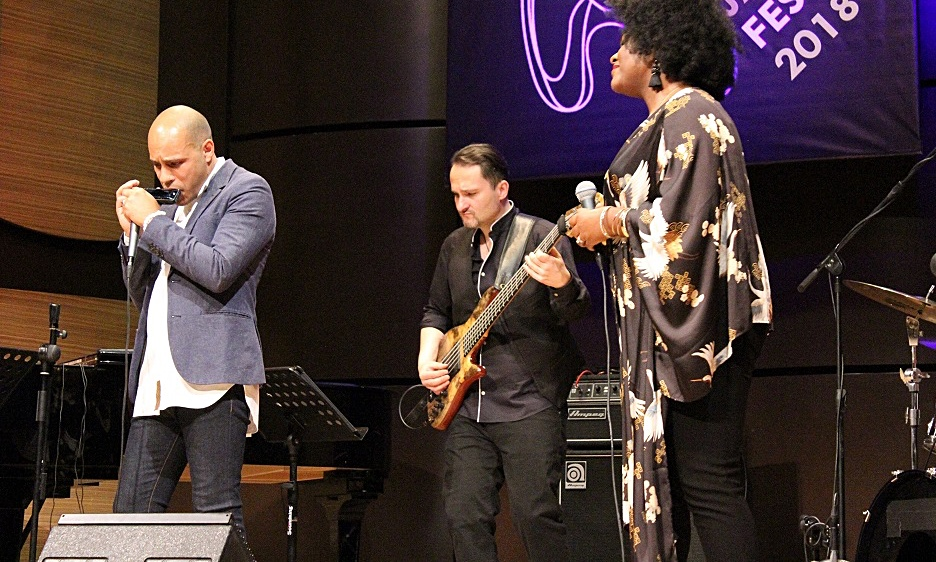 By IAN PATTERSON
November 13, 2018
Sign in to view read count

With multi-national, cross-cultural collaborations increasingly the norm in jazz - and perhaps its inevitable future identity - the BJF is in a strong geographical position to foster musical and cultural ties between Asian and European nations.

Stormy winds that you had to lean into to walk along the pavements had ripped the giant poster of the Baku Jazz Festival clean off the exterior wall of the Rotunda Jazz Club. Not for nothing is Baku nicknamed The City of Winds -a moniker derived from the ancient Persian name for the city, Bādkube, or 'pounding winds.' The cold Caspian Sea wind and the warm southern wind can whip up a veritable storm here on the Absheron Peninsula. The next day was a different story as glorious sunshine beat down from the blue sky. The contrasting meteorological conditions seemed an apt metaphor for the history of jazz in the Azerbaijan capital, which, over the decades, has shone in between the dark years of harsh Soviet repression and debilitating war with neighbouring Armenia.

During the tough times in Baku jazz refused to go away. Its practitioners skirted Soviet disdain for bourgeois Western music by turning to Azeri folk music as a prism through which to channel jazz, sewing seeds in the process that continue to nourish Azeri jazz musicians today. Figures like Rain Sultanov, Amina Figarova, Isfar Sarabaski—winner of the 2009 Montreux Jazz Festival Solo Piano Competition—and Shahin Novrasli have forged international careers, while the current crop of young lions spearheaded by pianists Elchin Shirinov, Nurlan Abdullazadeh and Afgan Rasul points to a bright future for Azeri jazz.

The Baku Jazz Festival is a major part of the modern revival of jazz in Azerbaijan, showcasing international bands and serving as a platform for Azeri jazz musicians. In a separate article, jazz musician, Azeri jazz historian and the BJF's Artistic Director Rain Sultanov talks about the changing character of the festival, throws light on the turbulent history of jazz in his homeland and reveals his determination to help nurture jazz in Baku. This article covers the final four days of the two-week Baku Jazz festival, an annual highlight of Baku's cultural calendar now in its fourteenth year.

Azeri jazz was well represented by pianist Nurlan Abdullazadeh, the group of drummer Elvin Bashirov and Afgan Rasul's trio, while it was Azeri musicians in the main who lit up the evening jam sessions -when they happened. Most of the concerts and workshops were held in the Rotunda Jazz Club—a stylish venue in the basement of The Landmark Hotel. The luxurious hotel, a major sponsor of the BJF, also hosted the musicians, technicians and journalists, meaning that everything was just a short lift-ride away.

Several concerts—the aforementioned opening concert by Omar Lye-Fook Group, that of Leonid Ptashka and Gasan Bagirov, and the closing concert by the Gregoire Maret Group featuring Christie Dashiel—were held in the elegant Mugham Center, as was the I Am Jazzman young jazz talent competition. An art exhibition entitled Labyrinth of Azerbaijani Jazz by Jamala Rahmanli, which depicted the history of jazz in Azerbaijan, and several jazz films, were also presented as part of the BJF 2018 programme.

Though Norwegian pianist Helge Lien already had a solo album plus several trio albums on lesser known Norwegian and Japanese labels—including the notable Assymetrics (DIW, 2004)—it was arguably not until 2008's Hello Troll on the German label Ozella Music, that he began to make major international waves. In the past decade, a further five albums, including another solo outing and a collaboration with violin virtuoso Adam Baldych, have cemented Lien's place as not only one of the finest Norwegian jazz pianists, but one of Europe's.

With Thomas Fonnesback on bass and Per Odvar Johansen on drums. Lien's trio played a set rich in lyricism and virtuosic flare. The trio opened with several as yet unreleased tunes. Gentle trio stirrings paved the way for "Ponkoral," a sumptuously lyrical tune featuring a flowing solo from the leader and a more measured response from Fonnesback. A delicate piano coda bled softly into "Nipa," Lien's gentle rumbling in the lower keys and Joahnsen's light cymbal pulse soon joined by Fonnesback as bass and piano slow-waltzed in unison. Fonnesback then Lien in turn stretched out, with Johansen responding intuitively to the ebb and flow. Lien's improvisation, buoyed by an insistent bass groove, linked a series of flowing glissandi -melodious but tension filled.

The third new tune in a row stemmed from a mantra-like, left-hand piano motif that was picked up by Fonnesback, and Johansen's cantering brushes. Maintaining the circling motif, Lien's right-hand roamed freely. As the pianist's improvisation gathered pace, the ascending, nine-note motif was replicated by Fonnesback. The groove safely in the pocket, Lien took the new-found freedom and tore into more angular terrain with gusto, his runs ever tighter, ever denser.

The pianist's music, however, was largely faithful to form and he was presently drawn once more into the trio's more measured gravity. The collective voice gradually dissipated, leaving piano and gossamer brushes to steer the trio into "Hymne," a deft and in turn exhilarating weave of folkloric, classical and jazz idioms from Lien's trio debut What are you doing the rest of your life? (Curling Legs, 2001). Shades of Swedish pianist Jan Johansson's famous folk-jazz explorations of the 1960s echoed in the quieter passages that bookended this number, but Lien is above all else, an original voice and unmistakable as such.

Folksy lyricism underpinned "Jasmine" -surprisingly, the only tune from Lien's 2017 release Guzuguzu. Fonnesback's temple-like cymbals and sombre mallets conjured an austere meditative ambiance, lightened by Lien's prettily trilling motif. Bass and drums observed a dry, ceremonial pulse, colored by deft percussive accents as Lien carved out a teasing solo of elegant restraint. Sandwiching the uplifting, baroque-tinged elegy "It is What it Is" were two contrasting tunes -the powerfully grooving "Gamut Warning," with Lien in expansive, probing mind-set, and for the encore, the dynamic Esbjorn Svensson tribute, "E." If it's true that imitation is the greatest form of flattery, then Helge Lien Trio paid heartfelt tribute to Svensson, and the hugely influential trio he led from 1993 until his untimely death in 2008, on this rousing send-off number.

The whoops, cheers and applause of the crowd was a fitting response to a highly engaging, emotionally nuanced set.

Virtuosity is so commonplace in jazz these days that it's almost taken for granted -the bar is seemingly raised higher all the time and Youtube-reared virtuosos seem younger and younger. Just occasionally, however, a musician comes with the talent to truly astound. This was the case when twenty two-year-old Brazilian bassist Michael Piopoquinha took to the stage of the Rotunda Jazz Club.

The six-string electric bassist was flanked by accordionist Douglas Marcolino and drummer/percussionist Adriano DD -two outstanding musicians in their own rights. With three days of rehearsals together in Paris and just a couple of gigs under its belt prior to the BJF, this trio was barely out of its wrapper, but over the course of a dazzling ninety-minute show you could have been forgiven for thinking it had toured the world several times already -so tightly attuned were the musicians to each other and to Pipoquinha's sometimes breathless charts.

On the opener "Hola Paris," shaped by Marcolino's sunny melody, the three musicians served early notice of their virtuosity, with simmering groove a constant presence. Marcolino was impressive, the accordionist's hybrid language—jazz, choro, samba—evoking accordion greats Sivuca and Dominguinhos. Pipoquinha then ignited the crowd with a display of uncommon virtuosity, racing up and down the bass neck as though merely wiping the strings with a cloth. All the while Adriano DD marked time, his percussive accents lending bursts of bright color. His own solo, unmistakably Brazilian in its carnivalesque vitality, returned the trio to the head.

Two highly melodic Dominguinhos tunes reflected the legendary accordionist's influence on Pipoquinha. Bassist and accordionist switched between air-tight unison lines and free improvisation on "Princesinha no Choro," while the even livelier "Te Cudia Jacaré" prompted Marcolino to abandon his chair and dance to his own beat. The infectious rhythm swept up the audience who clapped in time as the tune sped towards its conclusion.

Pipoquinha is much more than simply a fine interpreter, having proved his writing credentials on his two albums to date. The title track of Lua (Brasil MP3, 2017) also underlined the bassist's innate lyricism, his beguiling solo bass intro as gentle as a lullaby. Marcolino followed suit, with Adriano DD's brushes providing understated accompaniment. Pipoquinha's bubbling solo injected a bit of pep, though Adriano DD's rhythm remained resolutely low-key. The cantering "Baião Chuvoso" moved from rapid, bass and accordion unison lines to an entertaining percussion feature, with Adriano DD working his congas, cowbell, a shaker made of hundreds of plastic bottles tops, an inverted wine bottle, and a set of chimes fashioned from dozens of different-sized keys.

A highlight of the set came with an unaccompanied bass piece. Though there were sparks, Pipoquinha's signature agility was balanced by his rhythmic and melodic sensibilities. Melody lies at the heart of the bassist's music and even his most note-dense passages felt like a tune unfolding. It's early days yet in Pipoquinha's career, but it would be a surprise if, with a few more miles under his belt, this extraordinary bass virtuoso isn't spoken about in the same breath as Victor Wooten, Linley Marthe or Richard Bona.

A little knob-twiddling lent arresting bass harmonics on an atmospheric, version of The Beatle's "Eleanor Rigby," which morphed from gentle swing to frenetic bebop. Pipoquinha and Adriano DD cut loose with a tempestuous exchange but it was Marcolino's sinewy accordion lines that cast the strongest spell. Pipoquinha's up-tempo "Frevo pra Fran" featured a call-and-response between bass and audience and marked the end of the set. The trio, called back for an encore, obliged with two further numbers -drummer Luizinho Duarte's beautifully lilting samba "De Frente ao Baião" and a festive rendition of a Luis Gonzaga tune full of the baião rhythms from Northeast Brazil. The musicians took their bows to a standing ovation.

Hopefully this trio will be an ongoing concern, for if the intuitive chemistry that made this concert so spectacular was the result of just a few hours playing together, how good could it yet become? The extraordinary Pipoquinha is a name to watch closely. If he stretches his musical horizons beyond Brazilian traditions then there really are no limits as to what he could achieve.