Violinist and composer. A graduate of the Academy of Music in Katowice, tutored by Henryk Gembalski. Since 2012 he has been associated with ACT music publisher seated in Munich.

Dubbed “a violin prodigy”, he started his career at the age of 14. He was promptly recognised as an innovator combining the achievements of classical music and the contemporary language of the violin with an improviser’s talent. In a short time, he created his own style, which became an inspiration for a new generation of improvising violinists.

He has presented his music at the most important jazz festivals and in prestigious concert halls, in countries such as: Poland, Germany, South Korea, China, Japan, the United States, Canada, Austria, Iceland, Portugal, Azerbaijan, the Netherlands, Sweden, Norway, Finland, Italy, Spain, and Indonesia. He has performed and recorded with extraordinary artists such as: Yaron Herman, Agata Zubel, Cezary Duchnowski, Helge Lien, Aaron Parks, Lars Danielsson, Nils Landgren, Iiro Rantala, Marius Neset, Jacob Karlzon, Joachim Kuhn, and Billy Cobham. He has received numerous prizes and awards, such as: The Grand Prix and the individual award of the Jazz nad Odrą festival (2006), ECHO Jazz - a German music industry award (2013), the Polish gold Cross of Merit (2016) and the Decoration of Honor Meritorious for Polish Culture (2016). In 2020, together with the Adam Bałdych Quartet, he became a finalist of the prestigious BMW Welt Jazz 2020 award, with results to be announced in January 2021.

Adam Bałdych has been more and more active as a classical composer, writing pieces commissioned by renowned orchestras. In 2015 he composed the Mozaika-Impresje piece commissioned by the Szczecin Baltic Neopolis Orchestra, and in 2016 he wrote Antiphona to the texts found in the Qumran caves for the Orkiestra Muzyki Nowej. In 2019 he prepared the Early Birds Symphony commissioned by the AUKSO orchestra for the Auksodrone festival, and he is about to realise further commissions for AUKSO. In 2021 Adam Bałdych’s new composition, commissioned by the Stuttgarter Kammerorchester, will be premiered in Stuttgart.

Adam Bałdych is appreciated for his creativity in the field of jazz and contemporary music performance, blending the two domains in a creative manner, and a great expressivity of his musical interpretations. He has participated in recording nearly 20 albums.

The latest, released in 2020 - Clouds - is the sixth album he wrote and performed in published by ACT. This album is Bałdych’s collaboration with the extraordinary French cellist Vincent Courtois and the Dutch pianist Rogier Telderman

"Baldych reaches the highs and lows of the emotional spectrum with stunningly vivid imagery, creating a kind of poetry that is narrated by musical notes." - Robert Sutton / Jazz Corner

"He has, without doubt, the greatest technique of any jazz violinist alive today. We can expect everything of him" - Ulrich Olshausen - Frankfurter Allgemeine Zeitung

"Baldych gives his violin a voice and emotional power that have been too rarely heard in recent decades and offers a fresh take on the instrument for the contemporary scene - Allaboutjazz.com (USA)

"Baldych reaches the highs and lows of the emotional spectrum with stunningly vivid imagery, creating a kind of poetry that is narrated by musical notes." - Robert Sutton / Jazz Corner

"He has, without doubt, the greatest technique of any jazz violinist alive today. We can expect everything of him" - Ulrich Olshausen - Frankfurter Allgemeine Zeitung

"Baldych gives his violin a voice and emotional power that have been too rarely heard in recent decades and offers a fresh take on the instrument for the contemporary scene - Allaboutjazz.com (USA)

Bridges is perhaps his most fully rounded statement to date." -  Jazz Journal

A promising discovery of a new generation in contemporary jazz." - Jazzpodium

Adam Baldych is a sensation, hardly to be held back in his energetic and wild creative urge." -  Audio   Adam Baldych has made it from "wunderkind" to a mature improviser. In a visionary and virtuoso way he shows how to upgrade the classical violin to a jazz-ishdevice." -  Concerto   "An innovator of the jazz violin" - Fono Forum

"It seems as if Adam Baldych in the Helge Lien Trio has found a safe harbor for his songs." -  Jazz thing   "There is perhaps no more of an apt title than Magical Theatre to describe the imaginative and sometimes otherworldly ways in which Adam Baldych approaches his violin playing (…)Absolutely gorgeous and totally unexpected." - All About Jazz

"Baldych's impeccable, visionary performances on Magical Theatre reveal the possibilities of the violin, ranging from fiery intensity to otherworldly prettiness. Baldych reaches the highs and lows of the emotional spectrum with stunningly vivid imagery, creating a kind of poetry that is narrated by musical notes." - Robert Sutton / Jazz Corner

"An experienced listener will be able to discover many delicate musical hints and references in this music, especially in Bałdych's solos, but surely anybody able of enjoying good music will find here starlight qualities (…) What remains is to hope that as many music connoisseurs as possible will eventually discover this gem and hold it dear to their hearts. I certainly hope it does happen, big time, as it is well deserved! " - Adam Baruch / Jazzis 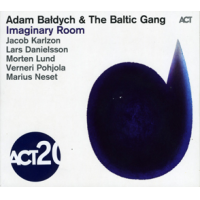 From: Imaginary Room
By Adam Baldych

The Room of Fear

From: Magical Theatre
By Adam Baldych

All About Jazz musician pages are maintained by musicians, publicists and trusted members like you. Interested? Tell us why you would like to improve the Adam Baldych musician page.