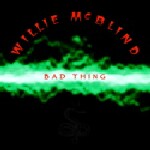 Many elements comprise the spirit of the authentic blues, from the weary, lonesome and forlorn lyrics and voices to the bent, plaintive notes coaxed from weather-beaten, jury-rigged instruments. It's that off-kilter, almost microtonal aspect of true blues tonality that is too often overlooked by cover artists and wanna-bes who reduce the music to three chords and the truth. Guitarist Jon Catler and the other members of Willie McBlind work near-miracles in bringing that raw aspect of the blues sound to the forefront.

In this case, Catler's instrument isn't a well-worn pawn-shop acoustic guitar, but rather a highly specialized tool that could come off as a cheap gimmick—or sound like crap—in the wrong hands. Catler plays a 64-note Just Intonation guitar, using close frets and fine tuning to wedge 64 separate tones into the space of an octave normally occupied by the 12 tones of the Western scale. The authenticity of Catler's vision and mission are made clear from the first few bars of "13 O'Clock Blues," where a slightly odd vibe of something amiss quickly evolves into serious blues power. This ain't just some white guy with a new toy; Catler knows his stuff and conveys it with deep energy and conviction. His fretless guitar work is equally convincing.

It helps, too, that Catler has a rough, saw-edged voice that complements both his playing and the smoother tones of band mate Babe Borden. Bassist Neville L'Green and drummer Lorne Watson provide tight backup for the two lead voices, in typically rollicking blues-band style. They give the impression of a band that has been working the road for years. Borden's finest achievement is her ability to match Catler's microtones without flaw or hesitation. She is fully her own woman, never trying to emulate Etta James, Koko Taylor or anyone else.

Most of the compositions are Catler's originals, with a few expected covers thrown in. Of the new tunes, "13 O'Clock Blues," "Blood Moon," and the hellacious title track are the highest points, but there's no real filler to be found here. Blind Willie Johnson's "Nobody's Fault But Mine," somewhat overdone by everyone from Led Zeppelin to Christian rockers The 77s, manages to sound fresh again in Willie McBlind's collective hands. Ditto Robert Johnson's classic "Stones in my Passway" and Willie Dixon's lesser-known "It Don't Make Sense," where Catler and Borden again pull off the almost ancient spirit of the blues.

Of all the contemporary "white-guy" blues bands making the circuit today, of all the guitar icons that have gearheads and shredders clamoring for more, Jon Catler and Willie McBlind represent a major step forward in the evolution of American blues. Yet they do so without losing any of the music's heart, which is perhaps the best achievement of all.