BY DAN BILAWSKY
December 12, 2017
Sign in to view read count 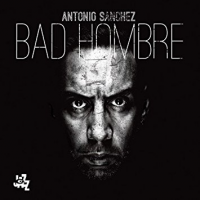 Antonio Sanchez's drum score for Birdman or (The Unexpected Virtue of Ignorance) served as a game-changer in the film industry, completely upending notions of what a soundtrack can and can't be. But more importantly, it altered our collective viewpoint on what the art of solo drumming is capable of expressing. Pulling sound from nothing more than skins and cymbals, Sanchez managed to produce and reflect serious emotional content. So is it any surprise that the next phase of his evolutionary journey should build on that concept?

Bad Hombre blends the personal, political, and percussive in ways never before imagined. Sanchez, a proud Mexican and a naturalized American citizen, uses the album both as an opportunity to expand on his solo work and a platform to express his anger and frustration with the current administration's xenophobic mindset and fearmongering tactics. The jittery grooves and unsettled sounds that ring forth from this album all speak to the darkness that's settled over the land, but more than anything, this music resonates as a work of resistance, struggle, and strength.

As with the aforementioned film score, Bad Hombre is a one man show. This time, however, samples and textural enhancements play an important role, serving as mind-altering additives. Early on in the artistic process, Sanchez recorded hours of material in his home studio. He experimented with different beats and prepared percussive textures, paying no mind to standard forms or running time. Then he set about to be his own Teo Macero, slicing and dicing at will. The addition of electronic elements to the mix served as the final act of creation, completing these artful collages that push boundaries and startle with unexpected transitions and transgressions.

Sanchez brings together his drumming, the sounds of Mariachi music, and the words of his nonagenarian grandfather, famed actor Ignacio López Tarso, as a mean of expressing his heritage on the album's opener—"Bad Hombre Intro." Then everything goes sideways. A steady bass line and disorienting grooves meet with electronic growth, moving toward an aural frenzy on "Bad Hombre"; stasis and development make an uneasy pact for the tempo-shifting "Fire Trail"; paranoid expressions and blurred lines rule on "Momentum"; and Sanchez dispenses with electronica influences to introduce "Antisocial," presenting himself in clear light before adding a buzz of dread and vocal samples as all things end.

There are moments of calm in the mix—"Distant Glow," for one—but the overarching mood is one of anger, angst, and energy. These electronica-glazed drum tracks, brilliantly bristling and intense, are a musical call to arms. Antonio Sanchez is mad as hell, and he's not going to take it anymore.