By Ian Patterson
December 12, 2017
Sign in to view read count 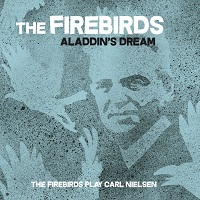 Three years on from The Firebirds (ILK Music, 2015), a riveting trio interpretation of the music of Igor Stravinsky—and to a lesser extent of Aram Khatjaturjan—Stefan Pasborg turns his attention closer to home with the music of Danish composer Carl Nielsen (1865-1931). The debut recording was in Pasborg's name but second time out the trio, featuring Anders Banke and Anders Filipsen, has adopted The Firebirds as its working name. It's a catchy, marketable name but it also feels appropriate, for although Pasborg is the nominal leader, this is a band of equals in the playing as in the arranging.

Nielsen's Aladdin was written in 1918 as incidental music for a stage drama but its orchestral sweep, rhythmic vitality, lyricism and drama elevated it above mere background music and the Danish composer would tour extracts from it to international acclaim. The Firebirds capture the essence of Nielsen's music by effectively tracing his melodic, folksy contours, with Banke and Filipsen often in unison. The keyboardist also handles bass rhythms, his lines on the exotically melodic "Oriental Festive March," echoing Nielsen's brass arrangements. The improvisations bleed seamlessly out of and back into Nielsen's melodies, the trio plying individual freedom without bending the compositions too far out of their original shape.

Clarinet and keys marry baroque elegance and abstract impressionism on the mellow vignette "Aladdin's Dream" -a prelude to the passions of the episodic "Hindu Dance." After a reedy saxophone and restless percussive intro of snake-charming ambiance, Pasborg unleashes a cracking locomotive rhythm that underpins Filipsen's solo. The keyboardist's textures conjure 1960s experimentalism—like a jazzier Ray Manzarek—eventually dropping out as drums and saxophone briefly whip up a storm. From the chaos the trio reconvenes in a quite regal passage -stately in rhythm, soaring in its lyricism.

On the atmospheric "The Market Place in Ispahan" the layering of reed and keyboard voices evokes bustle and babble. There's striking juxtaposition in the fiery rhythms and jarring dissonances of "Prisoner's Dance," with honking saxophone and distorted keys to the fore. The Firebirds get their collective claws into Nielsen's orchestral work "Helios Overture," with a grooving bass ostinato and Pasborg's industry propelling Banke to stretch out. As the saxophonist's flames die down Pasborg's climb, the drummer revelling in an unaccompanied solo that's inventive yet controlled. Filipsen in turn cuts loose, spurred on by Pasborg, before the trio locks into a groove for the sprint to the line.

The trio gradually steers "Little Suite for Strings" through the rhythmic gears. From it's The Doors-esque intro through a lightly propulsive yet brooding plateau to impassioned collective heights, this is The Firebirds at its most suggestive and hypnotic.

Aladdin's Dream is a fine tribute to Carl Nielsen's progressive, folk-inflected music. While it should help introduce one of Denmark's most celebrated classical composers to a wider audience, it might also steer the more curious classical music fans towards the delights of jazz/improvised music. One thing is certain, as The Firebirds demonstrate with panache, the two schools of music are in no way mutually exclusive.