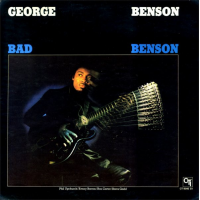 Some tunes are so sacred that any attempt to cover them can only result in failure. Yet George Benson makes this mistake twice on Bad Benson ; the band can’t quite manage a groove in 5/4 on Brubeck’s “Take Five” and once again falter with a horrid disco version of Ellington’s “Take The ‘A’ Train” complete with fake train whistles. Creed Taylor should have offered rebates to anyone that could listen to these numbers more than once without wincing. However, the rest of the album is pretty good; Benson has always been an excellent guitarist, and there’s little here of the full-blown pop artist he would later become. The full band numbers are worthwhile compositions; in particular on “My Latin Brother”, where Benson creates a memorable tune based on a repeating five note phrase and shifting rhythms. Even Don Sebesky’s arrangements, which tend to clutter other CTI releases, play a crucial role in augmenting Benson’s nimble fretwork on two tracks. Regardless of the quality of the music, Benson soars as a soloist, fashioning interesting melodic ideas from even the most ill-chosen material. Since this album comes late in Benson’s career, one might assume that Bad Benson lives up to its name in a way other than the guitarist intended. However, despite its faults, this album is filled with tasteful guitar-based jazz.