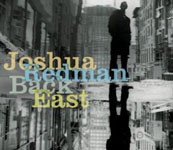 For Back East, his first all-acoustic album in six years, saxophonist Joshua Redman returns from the west coast to the Big Apple, collaborating with a group of largely New York-based musicians. But the album's title refers to more than geographic relocation. A series of songs—original and otherwise—reflect an interest in Eastern harmonies and rhythms, with a fresh look at two tunes from seminal influence Sonny Rollins' Way Out West (Contemporary/OJC, 1957) and a couple of standards are thrown in for good measure. The result is an album that could be polarized—especially considering Redman employs three different rhythm sections for this largely trio-based outing—but surprisingly, is not.

Instead, Redman creates a kind of aural travelogue that comfortably travels between two worlds. Opening with the often-covered "Surrey With the Fringe on Top" and a fiery "East of the Sun (West of the Moon)," both featuring bassist Larry Grenadier and drummer Ali Jackson, Redman treads the line between reverence and experimentation.

Redman switches to soprano, bringing in bassist Christian McBride and drummer Brian Blade for the original "Zarafah" and Wayne Shorter's "Indian Song." The eastern references are subtle on the former, with Blade's nuanced drumming and McBride's strummed bass providing a gentle pulse. Saxophonist Joe Lovano fleshes things out to a quartet for the latter, the two tenors constantly intersecting and interacting over McBride and Blade's dramatic flourishes.

Redman updates "I'm an Old Cowhand" and "Wagon Wheels," from Way Out West, demonstrating just how far he's come from his early-1990s emergence. Confident, modernistic and capable of implying so much with so little, he's spurred on by bassist Reuben Rogers and drummer Eric Harland—one of the hottest young rhythm sections around.

Redman goes head-to-head with guest Chris Cheek on his own "Mantra #5," an Eastern-tinged piece where the two sopranos trade-off the melody over a simple set of changes made all the more ethnic by Jackson's playing the kit with his hands.

But the album's greatest and most bittersweet moments are saved for last, when Redman's father Dewey—who passed away in September, 2006—guests on what would be one of his last sessions. The younger Redman never seemed to come much out of his father's approach, but the solo trade-offs at the beginning of a brief but simmering take on John Coltrane's "India" tell another story.

The elder Redman then goes it alone for his rubato "GJ." It becomes increasingly abstract, until Grenadier and Jackson leave him to close the album a capella. It may be Joshua Redman's album, but by leaving his father with the final word, Back East becomes more than just a fine trio outing that shows a side to the young saxophonist that's only been heard in performance until now. It becomes a spiritual tribute to an artist whose influence will continue to be felt for years to come.

The Surrey With the Fringe on Top; East of the Sun (and West of the Moon); Zarafah; Indian Song; I