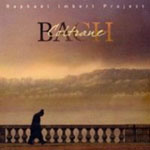 Some albums are personal and this one carries the burden of massive expectations, an anticipation similar to first hearing John Coltrane's Giant Steps (Atlantic, 1959) and just about anything by Bach.

French saxophonist Raphael Imbert dangles this tantalizing lure on Bach: Coltrane, which the multi-hornman promotes as the culmination of a research project into the sacred elements of jazz. For the album, a jazz quintet joins the classical Manfred Quartet "to demonstrate the spiritual and musical ties between Bach and Coltrane by following the thread of the Lutheran liturgy that links the Kantor's music, the Negro spiritual, and certain themes written by John Coltrane."

It's a marriage of what can be my two favorite legends on the right day, performed by someone near the top of a list of under-recognized musicians. So anticipation was great and the risk of disappointment considerable.

The potential is high early during Imbert's no-boundaries wailing in the midst of "Crescent" which, while lacking the steady beat and Coltrane's wise and extended narration, is part of a greater demonstration of the composition's versatility as the leader breaks it down into a four-part suite with distinct timbres and intensities.

Some two-part suites also stand out. Coltrane's "Song of Praise" is combined with Bach's "Jesu Meine Freunde BWV 227." Robust, it's probably the best example of the ensemble taking a smooth Bach narrative and gradually deconstructing it into a full free jazz journey of Coltrane disharmony. A straight string arrangement of Bach's "Concerto Pour Clavier Bwv 1056" is followed by Imbert improvising soprano over the merest sketch of instrumentation, keeping things mostly harmonious with a few interjecting, high-passion screams.

Organist Andre Rossi stands out among the other front men, with aggressive Bach pronouncements countering tranquil string quartet interludes that are mostly \breathers between the better material. Countertenor Gerard Lesne admirably and deftly dances with Imbert's soprano on Bach's "Cantate "Vergnügte Ruh, beliebte Seelenlust BWV 170." Lesne also displays sharper and more reaching vocals on the live "He nevuh said a mumbalin' word," although the wistful ballad is out of place on this set.

The sacred theme means a number of familiar pieces show up, but there are also rarities such as Coltrane's "Reverend King, originally performed with his wife, Alice, on the out-of-circulation eccentricity, Cosmic Music (Impulse!, 1966).

It's probably an even bet whether devotees of Bach and Coltrane will be intrigued or turned off by this album and it may have limited appeal for jazz fans not into genre melding experiments. Bach: Coltrane doesn't achieve the best of others known for such projects like Uri Caine and Jacques Loussier, but fans of those musicians should find enough to make it worthwhile.