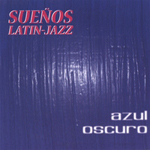 Interpretation exists as both a necessity and a dangerous path for the Latin Jazz artist. Creativity and personalization are important tenants of jazz; artists cannot repeatedly perform songs the same way. An artist makes their statement by interpreting melodic phrasing, harmonic alterations, and the rhythmic feel. When an artist interprets stylistic elements, they run the risk of diluting the music's historical foundations. Altering fundamental Latin rhythmic structures displays a blatant disregard for the music's lineage. Sueños Latin-Jazz pushes the boundaries between creative interpretation and stylistic degradation on Azul Oscuro, resulting in a unique yet somewhat uneven release.

Some material looses an edge through the emphasis of pop aesthetics. Long's sustained Fender Rhodes pacifies the samba rhythm on "Just Like Julie, while Levin's soprano sax outlines a smooth melody. Long presents an interesting solo, but the rhythm section's lack of interaction hampers any serious development. The band assertively bases "Linda Linda in Latin fusion, prioritizing the back-beat over the clave. The melody's rhythmic basis still refers to a Latin structure, but it soon gives way to a distorted rock solo from guitarist Neal Alger. These songs lose the music's Latin and jazz elements in a sea of fusion, rock, and pop.

The band remains within stylistic boundaries on several creative originals. Bassist Steven Hashimoto opens "Azul Oscuro with a short rubato solo, leading into a son montuno groove. Steel drummer Joe Sonnefeldt creates an improvisation filled with rhythmic invention until Long builds his solo into an intensive barrage of notes. Hashimoto's vamp sets the stage for "Guajira Mi Mujer, establishing a solid foundation for Levin's flute. The band breaks into a standard montuno, laying the groundwork for solos from Sonnefeldt, Levin, and drummer Heath Chappell. These songs bring out the band's ability to creatively present their voices and display their stylistic knowledge.

Sueños Latin-Jazz's choice to interpret Latin rhythmic structures ultimately defeats their creative efforts on Azul Oscuro. The band reflects a studied approach to Cuban and Brazilian genres, yet they stray from established performance practices. The frequent transitions into rock rhythms break the structural coherence of Latin music. The combination of overwhelming rock rhythms and pop chord progressions lean the band more towards fusion than Latin jazz. Still, the band presents interesting arranging ideas and compositionally, Hashimoto displays range and taste. With a greater attention to stylistic integrity, Sueños Latin-Jazz holds the potential to create strong and interesting work in the future.