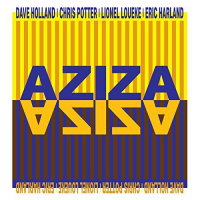 How do you define Aziza? Is it a collective-minded outfit? A supergroup? An offshoot or variant on previous gatherings? An archetype for musical synergy? A nod-in-name to African mythology and spiritual discovery? Yes, it's all of that. But why not avoid the traps and trappings involved with classification and just cut to the chase: Aziza is an artistically headstrong and muscular powerhouse, plain and not-so-simple. Would you expect anything less from the combination of bassist Dave Holland, saxophonist Chris Potter, guitarist Lionel Loueke, and drummer Eric Harland?

Those looking to connect the dots here can certainly find places where these musicians have overlapped in the past. Harland and Holland make up half of Prism, Loueke and Potter toured with pianist Herbie Hancock, Harland and Loueke served together in trumpeter Terence Blanchard's group, and three of these four—Holland, Potter, and Harland—now work with pianist Jason Moran in The Overtone Quartet and previously appeared in The Monterey Quartet with pianist Danilo Pérez. Familiarity is obviously a central feature for this foursome, but it never breeds contempt. Instead, it births risk and rapport.

Anybody who's still skeptical and/or expecting the worst—a marketing-made band lacking in sparks, for example—need only drop the needle on "Aziza Dance" to have their fears allayed. A better album opener you will not find. From wonky, burbling, and funky beginnings comes a clearer picture: a fierce, guitar-and-tenor fronted number in 17/8 that's both dizzying and delightful in the way that it sets up and subverts the groove(s). This foursome phrases over and around bar lines like nobody's business, essentially opening up new vistas by obliterating a sense of grid-like space and time.

In terms of contributions, assertions, and assists, all parties are basically equal and balanced. Each man provides two originals, gives his all in the act of creation, and ably supports the rest in the process. Loueke's sui generis sound—a post-modern patois that blends his cultural and musical languages with futuristic features—appears to be the dominant directional beacon and sonic base early on, both through the aforementioned opener and on "Summer 15," a number that seems equally connected to tropical tidewaters and pan-African ideals. But that predominance—real or imagined—doesn't last. He blends into the design of "Walkin' The Walk," a chilled-out number that provides some breathing room; he adds intriguing touches while taking a backseat to Potter (and Holland) on the irrepressible "Blue Sufi"; and he stitches his way into the intoxicating and slinky rhythmic weave on "Finding The Light." Nobody, Loueke included, overshadows anybody else.

While Aziza thrives in no-holds-barred environments, the beauty in the music shouldn't be overlooked. "Friends" serves as the prime example of what can happen when these four pull back and focus on lyrical thoughts. Harland knows what not to play here, Loueke artfully brings his voice into the picture, Potter taps into a deep emotional reservoir, and Holland uses his tonal presence as a way to hypnotize the ear. Aziza's music can be friendly or downright ferocious, depending largely on the setting, but it's never anything less than first-rate.