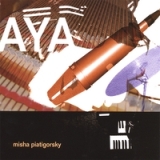 Pianist Misha Piatigorsky absorbs his heritage, environment, and experiences, to deliver the very hip and accessible AYA. Born in Moscow, the active New York musician is also a producer and composer (winner of the 2004 Thelonious Monk Composers Competition).

This recording is his second to be released in 2007 and is a slight departure from his well received, self produced trio effort Uncommon Circumstances. While the trio recording revealed strong compositions, the new recording seems more open and fresh as Piatigorsky states "I wanted to put out a record with my compositions produced my way using any and all elements of music that suited my whim.

This forward thinking has resulted in music that has appeal for not only traditional jazz listeners but also a wider audience. Calling upon some of his favorite musicians and singers (some of whom he's produced) the mural is more colored with a larger ensemble, spoken word, and three vocalists (including his wife, Ayelet).

The wide range of influences and styles showcases Piatigorsky's many abilities. A hip urban/street vibe is heard on the soulful "Mama Got Me Thinkin' sung by Barbara Mendes whereas "Low Talk features chilled spoken word by rapper/poet Rahj, along with smooth piano/voice scatting and vocals by Judy Bady. There are other angles to appreciate like Ayelet Piatigorsky's cathedral-esque chants mingled with heavy bass/drum beats on "Sancte Katherine or the striking "Je Me Souvien, a classy jazz ballad, with Bady's raspy voice and a nice acoustic aesthetic from the band.

Piatigorsky's band is hot on every track. They boogie with "phat horns and spicy solos on "Boogaloo Madness and deliver the funk on "Green Monkey where Piatigorsky shows his B3-organ skills. His personal reflections include the music of his homeland on "Promises, thoughtfully interpreted with voices and acoustic piano, and "One Time and Again (Anatalya's Lullaby) —poignantly sung and creatively dotted with a baby's sampled voice.