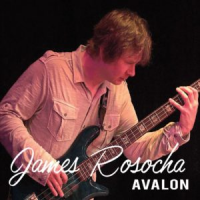 It used to be that electric bassists had a fine line to walk when taking the lead on their own albums. They'd be in for criticism for being either too fast and flashy or too subtle (or often just for making one at all). Maybe it's the result of an age when there are niches suited to every listener and vice versa, but the bass-as-lead tradition seems alive as ever and in fine hands. In the case of James Rosocha, it means a chance to serve up a big helping of electric juice and bring out both the noise and the funk.

A solo debut with twenty years of experience behind it, Avalon is a heavy slice of thick grooving fusion that should be like catnip to fans of Brian Bromberg, Dave Weckl or Rosocha's longtime colleague B.D. Lenz. With Audric Jankauskas's guitar as secondary lead, he manages plenty of virtuosity without sacrificing the pieces' sophistication or immediacy. The recording job packs an unmistakable low-end punch, but the leader's fleet string-slapping and lightning leads are no more important than the kicking gang of friends that back him up. Even a song called "Reverie" cruises in high gear with this crew.

The setup mostly keeps a power trio at the core (the string-slingers backed by Josh Orlando's drums), augmented by classic fusion keyboards, a couple fleet saxophones in spots, and even some playful vocal scatting that doubles the bass line (or possibly it's the other way around) on the thumping opener. The players adapt smoothly to the tone of each piece—blazing synth to propel the frenetic workout "Rumpus" or vibes to add a dreamy layer to the Latin feel of "Ariana." The centerpiece "Lost" stands a bit out of place with its R&B crooning, but just a bit. The driving groove keeps pace with the album's overall tone while only slightly exceeding the daily recommended allowance of wah-wah guitar.

Avalon may be misleadingly titled after its prettiest ballad moment (and that is a nice one), but for the most part it's brash, loud and joyfully funky. The top-flight cast is as tight and sharp as the compositions at hand, and it makes a rocking experience to give any fusion aficionado an exciting ride.