By Glenn Astarita
June 4, 2018
Sign in to view read count 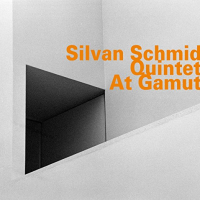 30-year-old Swiss trumpeter Silvan Schmid performs at a level of ingenuity and craftiness that some listeners might consider out of the ordinary for such a young artiste. Nonetheless, he's developed a mature and rather cunning compositional style. Among other noteworthy aspects, Schmid employs tubaist Lucas Wirz and cellist Silvan Jeger to build the lower-register bass parts with expansive flows and malleable sound designs. They also enjoy soloing opportunities amid the brazen choruses embedded with subtle melodies and odd-metered unison sprees. Schmid's works are often constructed with geometric formations via rippling currents and climactic buildups.

Schmid and Svosve are formidable soloists, yet from a holistic stance, the quintet abides by a democratic process. The final track "In Bocca Al Lupo," launches with Wirz' pumping lines, contrasted by Jeger's somber developments, and lightened by the hornists' toned-down phrasings. Although, the musicians delve into a gradual rebuilding process that concludes on a temperate note. Essentially, the quintet implements a musical agenda that gushes with ingenuity, entrenched with an assertive and wily sense of adventure.