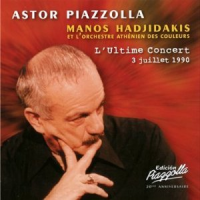 Astor Piazzolla's international breakthrough albums, Tango: Zero Hour and The Rough Dancer And The Cyclical Night (Nonesuch, 1986 and 1991), were made with small groups, with which the bandoneonist and composer is still most commonly associated outside Argentina. But Piazzolla also wrote for and performed with larger ensembles, frequently so during the 1980s, towards the end of his life. L'Ultime Concert was recorded in Athens, Greece on July 3, 1990, with composer Manos Hadjidakis' Athenian Orchestra of Colors. It is believed to be Piazzolla's last concert recording, and is an artifact of great beauty.

From the 1940s, both men wrote for film. In 1960, Hadjidakis won an Academy Award for his theme song for Jules Dassin's Never On Sunday. Piazzolla never won an Oscar, but his prolific output included two pieces which were included in the soundtrack for Bernardo Bertolucci's Oscar-winning Last Tango In Paris in 1972. Most of the soundtrack was composed by Gato Barbieri, and Piazzolla's contributions received no credit.

Plenty of simpatico might be expected to have been in evidence onstage in Athens that July 1990 night, and there was. The extent to which Hadjidakis may or may not have contributed to the arrangements for his strings, piano and percussion orchestra, we do not know. But Piazzolla had performed all the material before with many differently sized ensembles—"Adios Nonino" was written in 1959, "Concierto para Bandoneon y Orquestra" had been recorded the US in 1987, with Lalo Schifrin conducting St Luke's Orchestra—and it is likely that he would have sometimes collaborated with the directors of the orchestras with which he performed. In any event, the orchestrations and the themes fit together like two tango dancers in a clinch.

Piazzolla established his basic compositional approach with "Adios Nonino," an eight-minute piece which was performed twice during the Athens concert, first between two longer works, then as an encore. The structure is of five movements—fast, slow, fast, slow, coda. The fast sections are built around visceral tango rhythms and flashes of dissonance; the slow sections around mellifluous, fluid strings (cello and bass in Piazzolla's small groups, full string ensembles in larger ones). Piazzolla used variations of this pattern in the two three-part works heard here, "Tres Tangos para Bandoneon y Orquestra" and "Concierto para Bandoneon y Orquestra." The effect is filmic, episodic in a positive sense.

Piazzolla did not so much improvise on as embellish and subtly recalibrate through-composition, as the two versions of "Adios Nonino" illustrate. But the melodic details and inner harmonies vary sufficiently for the piece to bear listening to twice, just 21 minutes apart. The Athens audience responds to the second performance even more wildly than it does the first.

A month after this concert, Piazzolla, suffered a cerebral hemorrhage in Paris, and was left in a coma. He died in 1992, aged 71. Manos Hadjidakis died two years later, aged 69.