By TROY DOSTERT
November 9, 2017
Sign in to view read count 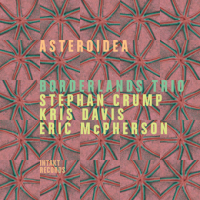 When one hears the slightly ominous bass-register ostinato from Kris Davis's piano at the outset of the Borderlands Trio's debut album, Asteroidea, a spirit of mystery and intrigue quickly emerges. Its repetitive effect is hypnotic, and it creates the kind of mood you'd expect in classic film noir, where the unexpected is lurking right around the corner. A willingness to venture into the unknown is at the heart of the music, and bassist Stephan Crump and drummer Eric McPherson play equal roles with Davis in charting this strange, amorphous territory.

All six of the cuts are freely improvised, but the trio is able to create a spontaneous logic for each of them. Davis delights in providing malleable rhythmic figures that can be elongated, toyed with, or refracted at will, and this requires the utmost in focus and communication from Crump and McPherson. The wide-ranging, 26-minute opener, "Borderlands," is a case in point, as ideas pour out of Davis's prepared piano and her partners respond empathetically, always seeking to locate a groove amidst the welter of fragments. And they usually find one, although it's never a straightforward process, as the musicians' restless energy keeps them on the constant lookout for new opportunities for spontaneous creation. It's truly a collective search, moreover, as Crump and McPherson generate plenty of their own ideas: a fine example arises midway through "Borderlands," where it's Crump and McPherson who establish the dynamic, driving tempo that prods Davis to some of her most impassioned playing on the record.

This is also a group comfortable with open space and silence, as their communicative rapport leads them to the kind of close listening where they don't have to be filling the conversation with constant chatter. For instance, when Davis returns later in "Borderlands" to a reworked reprise of the ostinato figure with which she began the piece, Crump chooses not to fall in line with the groove; instead, he goes to arco, tempering the intensity and taking the music in a more contemplative vein, which leads the group to a quieter, but equally transfixing, exchange of thoughts. Another example is "Ochre," a spare, haunting track with a patient engagement with minimalist motifs that allows all three musicians to inhabit a space of delicate tranquility.

Proof-positive that collective improvisation can sometimes find its most compelling expression in the interstices between the notes, the Borderlands Trio has offered what is hopefully only the first of many intrepid explorations to come.