BY JOHN KELMAN
September 23, 2004
Sign in to view read count 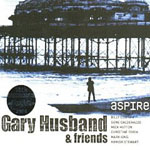 Sometimes you just never know when something is going to come up and hit you over the head. Gary Husband, better-known as a drummer, did just that with '01's The Things I See , recently reissued by Angel Air Records, where he delivered an inventive and heartfelt solo piano record interpreting the music of sometime musical partner, guitarist Allan Holdsworth. In fact, while he is still an active drummer, in the past few years he has been concentrating as much, if not more, on establishing himself as a pianist/keyboardist and writer, including work with his trio featuring the under-appreciated bassist Mick Hutton and drummer Gene Calderazzo. Additionally, his recent Force Majeure project, featuring Randy Brecker, Jerry Goodman, Jim Beard, Elliott Mason, Matthew Garrison and Arto Tuncboyaciyan, received rave reviews for its UK tour, and a concert DVD is in the works.

Amidst all this activity comes Aspire , a collection of original compositions, standards and a couple of surprises that continues to demonstrate that Husband, always a fine drummer, is an equally skilled pianist. Unlike some players who second on another instrument, the piano is no trivial pursuit for Husband; clearly he looks to it with the same importance as his percussion work, and it shows. On "Softly as in a Morning Sunrise" Husband shows a sense of invention, coupled with a more abstract sensibility that elevates his take above the multitude of versions of this often-recorded standard. And his accompaniment on the four vocal tracks, including a delicate version of Jobim's "Dindi" sung by ex-Level 42 mate Mark King, is intuitive and empathic. Husband's clear and detailed understanding of the interaction between rhythm and harmony makes for an intriguingly dark take on Miles Davis' "Jean Pierre."

As good as the covers are, however, the real meat of the album comes with Husband's own material. "Somewhere in Time," which features Hutton and drummer Billy Cobham, clearly references Husband's work with Holdsworth, including lush synth tones and a more advanced harmonic approach. His "New York City—Suite in Four Parts" manages to emulate the look and feel of the city by presenting an ever-shifting collage of ideas that somehow manage to unify into a cohesive picture.

Most remarkable about Husband's work is how developed, how mature it is. While he's obviously been working at this for some time, it is still uncanny that he should emerge so fully formed in such a short period of time. Husband clearly sees this as a logical evolution for himself as a musician, and while this is not exactly a new precedent—drummer Jack DeJohnette's reputation as a pianist and composer is also well-established—it is unusual to find an artist, mid-career, making such a radical change and such massive strides. While Husband will clearly not be putting the drumsticks down anytime soon—nor should he—the fact is that in the past few years he has begun to emerge as an artist whose reach is far broader than anyone could have predicted.