By John Kelman
September 23, 2004
Sign in to view read count 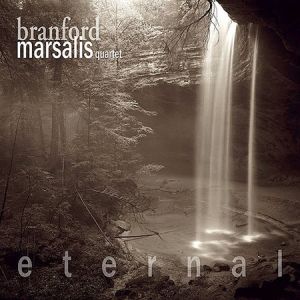 When you hear that an artist is doing a ballad record, the first thing that comes to mind is "accessible product, commercial album for the masses." And, truth be told, some records seem to fit that description perfectly—Michael Brecker's Nearness of You: The Ballad Book , for example, sported an ace team of players but was ultimately unsatisfying featherweight music best suited as background dinner fare. This year, however, has seen two ballad albums with loftier ambitions: Joe Lovano's I'm All for You managed to be accessible without sacrificing any musical commitment; and now, saxophonist Branford Marsalis' Eternal , which may be the weightiest, most significant ballad record to come out in years.

Even when the quartet, featuring pianist Joey Calderazzo, bassist Eric Revis and drummer Jeff "Tain" Watts, tackles more traditional fare like "Dinner for One Please, James," the tender ballad retains a substantive feel that, while completely accessible, reveals many layers on repeated listens. Watts, normally thought of as a powerhouse drummer, is outstanding in his pure simplicity, with brushwork that dovetails perfectly with Revis' equally modest playing. And yet, while this album is for the most part somewhat restrained, it is still imbued with deep feeling and rich subtext. Calderazzo, a player with more of a reputation as a post-Tyner burner, displays a subtlety and lyrical depth that, for all its austerity, is filled with passion.

As much as the album is about poignancy and a certain romantic sense, there is always the feeling that there is something more substantive lying just beneath the surface. Revis' "Muldoon," a duet between Calderazzo and Marsalis, is a rubato tone poem that conjures images of darker loss and brighter redemption. Marsalis' lush tone seems to go deep inside the tune, being more about finding the inner essence of the piece as opposed to merely contriving clever ways to navigate it.

A characteristic of the whole album is, in fact, how the quartet manages to transcend the simple parameters of the material and instead finds something more basic, more elemental. This is not an unusual goal, but somehow when faced with a programme of material that is so deeply emotional while at times so deceptively simple, Marsalis and the group succeed in finding the place where music becomes the purest representation of feeling. The playing is so inspired and intuitive that one forgets about more conceived musical concerns and, instead, finds oneself in that same moment the musicians are so clearly in.

While there is little to compare on a musical basis, somehow the ghost of Coltrane is watching over Eternal , especially on the 17-minute title track that closes the album. There is a spiritualistic sense coupled with a sense of adventure that makes this more than simply a collection of slow tempo pieces. Instead, Eternal goes to that deepest place, the core of human experience and, consequently, may be Marsalis' most fully realized record to date.

Visit Branford Marsalis on the web.