Duncan Lamont Big Band: As If By Magic

By Bruce Lindsay
December 3, 2016
Sign in to view read count 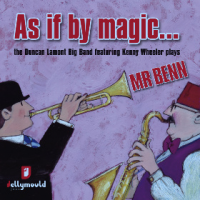 Mention Mr Benn to people who were young children (or university students) in early 1970s Britain. They may well smile ruefully, develop a far-away look in their eyes and mutter something about things having been much better back then. Nostalgia is a wonderful feeling. At least some of that warm feel-good glow can be put down to the music on this album— As If By Magic—and its composer, saxophonist Duncan Lamont.

The bowler-hatted Mr Benn lived in 52 Festive Road and regularly visited his local fancy dress shop, where he would don a different costume each time, embarking on magical adventures before returning safely home. Lamont's music accompanied him on his adventures, doing much to create the special atmosphere of each tale. In December 2011, 40 years after the cartoon series was first broadcast, Lamont gathered together a top-flight big band to record new arrangements of some of his compositions.

"Mr Benn," the series signature tune, immediately establishes the endearing nature of the titular character. It's joined by seven more compositions which soundtracked our hero's escapades with dragons, in balloons and underwater, and his walk back home. Although the band is very much in the big band tradition and the composer is very definitely Scottish, there's a bucolic, English, feel to many of the tunes especially the laid-back and gentle "52 Festive Road." Some of these tunes were written to match Mr Benn's adventures—"The Balloonist" readily captures the freedom of flight in a hot-air balloon race (Mr Benn and his friend did have to contend with the wicked Baron, who was determined to win the race at all costs, but the ingenious use of a piece of drainpipe soon put paid to the villain's evil plans).

The band features the cream of UK-based musicians. Lamont doesn't play himself, although his son is in the sax section. Lamont's arrangements leave plenty of space for solos—almost every player takes a solo across the eight tunes, all three trombonists take their turns on the swinging "Coming Home" and ten musicians get the chance on the energetic "Don't Forget The Dragon." The band's star name is the late Kenny Wheeler, who played on the original Mr Benn soundtrack, but there are no weak spots in any of the sections—this is a band that deserves the chance to play this music live, and often.

But what if Mr Benn means nothing to you? Will the music of As If By Magic still appeal? Only if melodic, swinging, beautifully-played and joyful music appeals. So the answer is almost certainly "Yes."

Mr Benn; As If By Magic…; The Dragon’s Tale; Coming Home; The Balloonist; 52 Festive Road; The Sea Monster; Don’t Forget The Dragon.