By John Eyles
December 3, 2016
Sign in to view read count 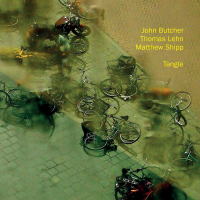 Recorded at Café Oto in February 2014, on the first night of pianist Matthew Shipp's three-day residency at the venue, Tangle is the first recording of the trio of saxophonist John Butcher and synthesiser player Thomas Lehn with Shipp. (The YouTube clip, below, was filmed on the night in question.) Typically, there were previous links between the three, with evidence being available on past Fataka releases; Butcher and Lehn had first collaborated as far back as 1996 and, in June 2012, the two had recorded with John Tilbury as captured on Exta (Fataka, 2013); at a previous Shipp residency at Oto, in 2010, he and Butcher had played as a duo for the first time , as heard on At Oto (Fataka, 2012). Lehn and Shipp seem to have had no previous contact prior to this date, though.

The music consists of four tracks, totalling just over forty-three minutes, so they probably represent an entire set by the trio. The first three tracks, together entitled "Cluster," play seamlessly as one continuous piece which takes up the lion's share of the album, with the six-minute "Tiefenschärfe" rounding it off. "Cluster" begins in subdued fashion, with Shipp playing a series of chords so formally that one might suspect this to be a notated composition by the pianist; however, the sleeve credits all three members for the piece, usually a sure sign of an improvisation. Alongside Shipp, Lehn's synthesiser acts as a welcome anarchic element, interjecting occasional beats, clicks and glitches that complement the piano.

When Butcher enters on saxophone, a couple of minutes in, things rapidly shift onto more familiar improv territory, with the sax and piano exchanging phrases while the synth finds plenty of space to comment without detracting from them. Once Butcher has found his feet, his playing becomes noticeably freer and he soon cuts loose and blows, bringing a similar reaction from Shipp. In fact, the dynamic between Butcher and Shipp resembles that on At Oto where, through subtle musical negotiation, they found common ground on which they were both comfortable.

The end result is a model of trio improvisation in that all three seem constantly aware of the others' playing, so that each contribution from any of the three has an obvious effect. Changes of mood or tempo do not happen at the behest of any one player but evolve organically from the playing of all three. The music is at its most thrilling when all three are playing full-on together—but even then, it never becomes, um, tangled. Just as impressive are the more measured, ensemble passages. If, as we must hope, this trio records together again, they should not name the group after this album!