Guitarist and educator Sheryl Bailey recently moved from New York to Boston to become the assistant chair of the guitar department at The Berklee College of Music. In this episode of Liner Notes Sheryl talks about the challenges of moving to a new city while overseeing the education of nine hundred guitarists in the time of the coronavirus. We spoke over zoom-heads up that the interview is replete with the street sounds of Washington Heights. This episode features music from ...

Guitarist Sheryl Bailey and bassist Harvie S have clearly learned the first rule of getting ahead in show biz in these days of glitz and hype: find a clever and distinctive name--in this case Plucky Strum (after all, Lady Gaga was going nowhere as Stephani Germanotta). Departure is the duo's second album under that name for Whaling City Sound, one on which they show that pluck or strum by any name can be charming and persuasive. Musically ...

The Sheryl Bailey 4: For All Those Living

Wes Montgomery may be gone, but the great jazz guitarist's crisp, rich-toned sound lives on in Sheryl Bailey, whose style is so reminiscent of the icon, but whose technique has also been compared to that of Pat Martino. It is quite clear that Bailey is a gifted guitarist as well as a veteran musician, with several albums to her credit. Bailey has performed in many formats throughout her career, yet For All Those Living, is her first to lead a ...

Sheryl Bailey: For All Those Living 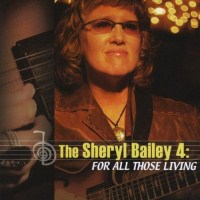 In the past, guitarist Sheryl Bailey has been an embodiment of versatility through her work with bassist Richard Bona, and with David Krakauer's klezmer ensemble. She now has another strain of music in her bag with this program of straight-ahead jazz guitar. Both Pat Martino and Wes Montgomery can be cited as reference points for this outing, but the fact remains that Bailey brings her own not inconsiderable character to bear. The featured quartet is Bailey's current working group, and ...

While guitarist Sheryl Bailey's A New Promise was a tribute to another tremendously talented female guitarist--the late Emily Remler--For All Those Living touches on a wide variety of figures, both here and gone. Bailey's music pays direct tribute to fellow guitarists, like Jack Wilkins ("Wilkinsburg"), Masa Sasaki ("Masa's Bag") and the late Jimmy Wyble, but she also looks beyond her own instrument with an homage to the great Hank Mobley, the man that jazz critic Leonard Feather dubbed “the middleweight ...

Sheryl Bailey 4's For All Those Living has a nice, balanced feel to it, with a lively, up-tempo pace that never becomes frenetic. It's finely played, and rewards serious listening, but none of the musicians are overly showy.The quartet plays as much with Bailey's guitar work as behind it, and is clearly sympathetic to its performers. Already highly respected--and perhaps because of it--Bailey plays with the self-confidence of a guitarist who's surpassed the point of seeking validation through ...

Sheryl Bailey has been rising to the top of the jazz guitar world ever since she burst onto the national scene by taking third place in the 1996 Thelonious Monk Guitar Competition. Following her top three finish in the competition, and graduating from the prestigious Berklee College of Music, Bailey has released five albums as a bandleader, a DVD and two instructional books, all while maintaining a seemingly constant touring schedule and holding down an associate professorship at ...