Our 673rd episode of Neon Jazz begins with the prolific pianist and composer Roger Kellaway. We talked to him about the COVID-19 lockdown as we have done with so many other musicians during 2020. Some other musicians interviewed or profiled during this hour of jazz is Scott Colley, Pete McGuiness and Robin McKelle. We pay our respects to 107-year old jazz drummer Viola Smith and listen to new music from Kansas City vocalist Molly Hammer. Cheers. Playlist Roger ...

Criticize pianist Roger Kellaway? You must be kidding. Describe Roger Kellaway? That's a fair bet and far more advisable. Kellaway, who is eighty years old as this is being written, embodies the boundless exuberance, creative power and impeccable technique of any player half his age, all of which he displays unfailingly on The Many Open Minds of Roger Kellaway, recorded in concert nine years ago at the Jazz Bakery in Los Angeles and released on Kellaway's eightieth birthday, November 1, ...

There's not a single category that can contain the wit and wonder that is Roger Kellaway. Over the past 60 years he's put his musical stamp on film, television, pop, rock, new age, ballet, and modern classical forms, garnering awards and acclaim wherever his pen and piano work happen to fall. And let's not forget jazz. While Kellaway has played with a laundry list of notables from the aforementioned realms, his jazz résumé is no less impressive. Sonny Rollins, Clark ...

Trumpeter Carl Saunders is best known for his contributions to jazz orchestras, having put his mighty horn to good use for Stan Kenton, Bill Holman, Maynard Ferguson, Benny Goodman, Gerald Wilson, and numerous other big band leaders of note over the past half-century. Yet his work as a composer may end up being his lasting legacy. Saunders has amassed a considerable body of work--more than three hundred of his tunes appear in a Real Book-style collection titled New Jazz Standards--and ... 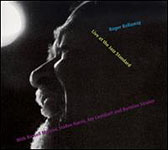 Pianist Roger Kellaway can swing hard and has played with everyone from Sonny Rollins to Joni Mitchell. His knowledge of music is encyclopedic and his pianism is instantly recognizable for its airy, sparkling quality, flowing from a singular skill he has to incorporate stride, swing, boogie and more into something totally modern. Long an in-demand sideman, Kellaway has too rarely recorded fronting his own group. Which brings us to the happy occasion of this live 2006 Jazz Standard set with ...

It's a bit out of the ordinary when a jazz trio does not include a piano. Perhaps it's even more unusual that an ensemble would be without drums. Yet that is the approach taken by pianist Roger Kellaway for the two-disc Live at The Jazz Standard. Kellaway began playing piano at age seven. His career has included spots with Duke Ellington, Elvis Presley, Joni Mitchell, Dizzy Gillespie and Quincy Jones, among many others. Kellaway has more than 200 ...