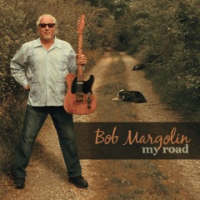 The term blues guitarist has been so abused and misused, that when the real player comes along, it sounds like a jaded cliché to utilize it. Bob Margolin is a blues guitarist. His tenure in the Muddy Waters band from 1973 to 1980 netted him that distinctive title, and My Road, is his story. On this record, Margolin opted to go with a bare bones ensemble consisting of himself on guitar, Chuck Cotton on drums, and Ted Walters on the ...

One beauty of the blues is that its masters may get together with no practice and produce fabulous music. That is what occurs on The Bob Margolin All Star Blues Jam, where the leader assembles what is left of the Chicago Blues 1950s heyday for a bit of a trip down memory lane. Margolin, himself an alumni of the Muddy Waters band, is quite deft at pulling this all off. Joining Margolin is harpist Carey Bell, who produces a very ...