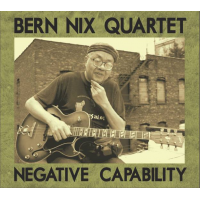 Guitarist Bern Nix has participated in many fine groups over the course of his career, most notably saxophonist Ornette Coleman's historic Prime Time, where Nix became one of the foremost interpreters of Coleman's groundbreaking harmolodic approach. These days Nix has created a quartet that's exploding onto the jazz scene in a big way. After a fiery set at the 18th Vision Festival, musician-blogger John Pietaro declared, “The Bern Nix Quartet is everywhere and exactly-where, and the overall effect is dizzying ...

The guitarist Bern Nix is principally known as a key member of Ornette Coleman's Prime Time band, the almost sole practitioners of harmolodic funk. The exact “rules" of harmolodic funk have never been completely clear to anyone other than its creator, but remnants of Ornette's head-heart-groin style are still discernible in Nix' current playing approach, even though he now sounds increasingly rooted in the jazz tradition. In fact, this New York resident cites Charlie Christian as a significant influence and ...

Bern Nix: A History In Harmolodics

New York-based free jazz guitarist Bern Nix is one of the few people who are well-versed in Ornette Coleman's “harmolodics" style. He played with Coleman from 1975-1987, and now leads the Bern Nix Trio in New York City. In his compositions and his intriguing covers of standards, he is always looking in the corners of the music for something new.Described recently by a viewer on YouTube as being “the Billy Bang of the guitar," Nix's sound is both ...