By Martin Longley
September 5, 2009
Sign in to view read count

The guitarist Bern Nix is principally known as a key member of Ornette Coleman's Prime Time band, the almost sole practitioners of harmolodic funk. The exact "rules" of harmolodic funk have never been completely clear to anyone other than its creator, but remnants of Ornette's head-heart-groin style are still discernible in Nix' current playing approach, even though he now sounds increasingly rooted in the jazz tradition. In fact, this New York resident cites Charlie Christian as a significant influence and it's not possible to travel much further back than that in jazz guitaring history.

This month, Nix is appearing in a rare sideman role, as a member of saxophonist Patrick Brennan's Present Personic, at The Local 269. Bassist Lisle Ellis will complete the trio lineup. Nix has been periodically working with Brennan for over three decades. "He's a Midwestern jazz fugitive, like me," laughs Nix. "He writes very formal compositions, very much notated, complex scores and then there's some free improv. His music is very cerebral. He had a band called Soup back in the '70s. We made a record 30 years ago, with trombone and saxophone. The recording machine broke down and the music was very complex and in odd meters. The record never came out. Patrick has always hired me because he writes a lot of his own music, very formal, kind of like Third Stream. There are a whole group of jazz people from Michigan and Ohio who migrated to NYC."

Nix' New York profile is as low as his barometer. "That's not deliberate," he says. "Gigs are hard to find. I started playing at 17 and can't play for the door [money] any more. A lot of the clubs I liked to work in, like The Knitting Factory, Cooler, etc, are gone. I still enjoy playing The Stone..."

Nix was a member of Prime Time between 1975 and 1987 and still maintains contact with Coleman. "I see Ornette sometimes, saw him a couple months ago. I played with him a bit two or three months ago at his loft. He's a great musical thinker, a very complicated man. Prime Time was a significant point in my career; it was about taking the properties of melody, rhythm and harmony and trying to do something different, non-traditional. An artist is like the millionaire who rides ahead in the limousine and everyone is trying to catch up to the limo. I think [Jean] Cocteau said that. We were all trying to catch up to Ornette. A lot of people don't understand avant-garde music; they think people who play that can't play. The idea of trying to challenge yourself and do something different, that's what Ornette is about..."

The Low Barometer album came out in 2007 and was preceded by a soundtrack to the documentary A James Lord Portrait. Nix is presently trying to find a home for his next trio recording, a setting which he considers to be his prime vehicle. "The solo thing is something I can do from time to time," he says, from the office of Tompkins Square Records, his record label. "The response to the solo record was good, but I'm not sure if it was an exercise in vanity. The trio is my main outlet. I guess I have this unique way of playing; sometimes it's hard to get hired when the mainstream people say it's too far out. When I learned harmolodics from Ornette he said you could go and apply this and play it anywhere, which I found out is true if you are playing it and you're Ornette. I had to write my own tunes because no one is gonna hire you to play Ornette's tunes. 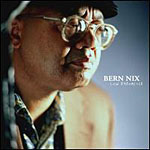 "The title of Low Barometer is taken from a 19th Century poem by Robert Bridges. It's about the unconscious. Like when you're dealing with creative work, you are tapping into that. Every tune on there started with themes and the rest is variations on the material. I practiced a lot before I recorded it. Some of the tunes, I couldn't play anymore because I developed arrangements that would be too hard to play now. In order to be spontaneous you have to practice certain techniques. It's paradoxical that way. There are a lot of jazz players who don't want to swing. I've always liked that aspect in my music. The rhythmic vitality of swing, although no one has adequately defined swing, the hallmark of a great jazz musician in the old days was if they could swing. A lot of people say that it's not that important today. Derek Bailey said jazz was like museum music, was idiomatic, archaic. How do we make jazz viable in the 21st Century and still honor the properties of the music? That and the economic challenges are what we are facing: playing jazz is like deciding to be a riverboat pilot or a blacksmith."