Adi Braun: The Rules of the Game 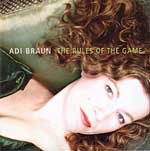 Adi Braun The Rules of the Game Blue Rider 2005

Let us now pause to take assessment of another new vocalist, Canadian Adi Braun, who impressed with her 2003 debut, Delishious. The same trio of pianist Doug Riley and veterans Steve Wallace (bass) and Terry Clarke (drums) is once again on board for this album, with the addition of Perry White on tenor sax.

The debut album from Adi Braun, a talented young singer from Toronto, is, for the most part, Delishious. In fact, one of the few missteps was placing Shirley Eikhard’s “Crazy with the Heat” first, ahead of such gems as the Gershwin brothers’ amusing title song, Cy Coleman / Carolyn Leigh’s delightful “When in Rome” or one of the other standards by Kurt Weill, Vincent Youmans, Harold Arlen, Ned Washington or Antonio Carlos Jobim (Braun is especially alluring on “The Girl ...