The Four Ages of Bob , the tenth release by guitarist Andrew Cheshire, continues on the path of his previous recordings with inventive, stylized, and captivating music. The cover art and liner notes (also produced by Cheshire) elaborate on a fictional character named Bob whose life has been filled with change. From concept to composition, the recording effectively parallels Bob's life with music that varies in mood, tempo, and execution. Cheshire's quintet of solid musicians (also including piano, saxophone, and ...

Andrew Cheshire's last album, Pavane Pour Une Infante Difunte , was one of the finest guitar trio CDs of the past twelve months. With The Four Ages Of Bob , Cheshire has expanded the trio into a quintet and recorded another outstanding record. This time the Philadelphia-based guitarist chronicles the progress of Bob, a sort of archetypal American optimistic free spirit, from the 1960s through an anger-drenched 1980s, and up to his incarnation as a 1990s computer geek who ultimately ... 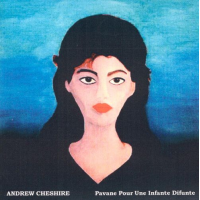 Guitarist Andrew Cheshire isn't well-known, even within the jazz community, but he ought to be. On Pavane Pour Une Infante Difunte, his eighth CD on his Joule label, he reveals himself to be a thoughtful, always interesting, and at times inspired improviser.

This CD is the product of Cheshire's working trio, a tight, fluid group that can swing hard or rock out as the music requires. Cheshire likes to segue from rock or funk beats to swing tempos. He also ... 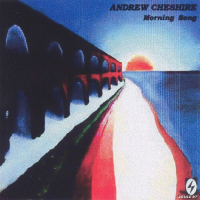 Andrew Cheshire is an excellent Philadelphia (area)-based jazz guitarist who has been releasing music on his Joule Records label since 1996. Of note is the superb Water Street Revival, accumulated over several recording sessions, and an introspective solo guitar project, Guitar Noir. Mr. Cheshire arrives today with a guitar-organ offering that is as much original as it is steeped in the genre’s traditions. Joined by organist Dan Kostelnik and drummer Jay Rosen, the guitarist performs songs that insinuate melody and ...

Chances are you probably haven’t heard of guitarist Andrew Cheshire. But as with the majority of jazz musicians, popularity is not synonymous with talent. Mr. Cheshire is a self-taught and self produced artist, and his latest release, simply titled Faces, is a collection of selected works from 1991 to 2001.

This is Cheshire’s seventh recording on his own recording label, Joule Records. The new release gives a glimpse into the skills in his jazz repertoire. The configurations range from ensemble ...

Guitar Noir is a moody little solo guitar soundtrack from the vastly underrated Andrew Cheshire. Cheshire is well known for having an omnivorous appetite for musical genre that is apparent on his five some releases on his record label Joule. Difficult to categorize, Cheshire's playing ranges from Jeff Beck Fusion to Joe Pass Mainstream.

A perfect soundscape for a dense and twisted mystery thriller, Guitar Noir finds Mr. Cheshire investigating the darker side of the solo ... 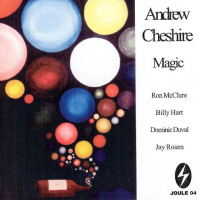 Magic , Pennsylvania-based guitarist Andrew Cheshire's fifth CD as a leader, is a highly interactive, improvizational affair. Operating with just bass and drums in two different personnel combinations, the sound is, as you would expect, open and sparse. The bassists and drummers also chart their own improvizational course throughout most of the tunes, so the outing is pretty open-ended and free, although the underlying meter and chord structure of each tune usually remains evident.

The first half of the program ...