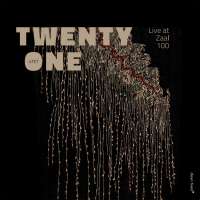 I'm assuming that the Twenty One 4Tet recording Live At Zaal was conceived as a one-off deal, with Portuguese trumpeter Luís Vicente visiting Amsterdam-based players John Dikeman, Wilbert De Joode and Onno Govaert. This concert, from September 2015, finds Vicente combining his impressive craftsmanship with three like-minded players. Then again, it might be just part of Vicente's revolving, maybe a better word “evolving," sound world. Of late, he has collaborated with the French/Portuguese quartets Deux Maisons For Sale ...