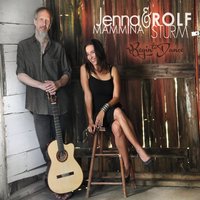 Neither Jenna Mammina nor Rolf Sturm, together or solo, are strangers to these pages. Mammina released Under the Influence (MGR) in 2000 and Strum offered us his superb Young (Water Street Music) in 2016. The two of them showed up with Spark (Water Street Music) in 2015. Sturm is a nylon-string guitar specialist perfectly suited to provide foil to the coquettish and intelligent vocals of Mammina. Their Spark was well received and featured old and new music presented in new ...

Jenna Mammina: Under the Influence

Now working out of California, but originally from Michigan Jenna Mammina's heroes were the musicians who came from that state, all the Motown artists and Aretha Franklin, Betty Carter, Abbey Lincoln. During her teens she was influenced by Carole King, Jim Croce, James Taylor and Joni Mitchell. Later on she was turned on by artists running the gamut from adventurous rock bands like Yes, Genesis, and especially the Grateful Dead. Eventually, as she matured, she graduated to jazz via John ...