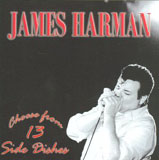 Compiled from twelve of James Harman's most recent CDs, which were originally released between 1981 and 2003, Side Dishes offers a good look at where he's at today. Singing and playing a mean harp, the bluesman packs a wallop into every performance. Based in Los Angeles, he continues to please local audiences just about all year round. Fortunately, Harman isn't one to sit tight for any length of time. He tours frequently and spreads his unique blues message around the ...

James Harman is a senior member of the first wave of white American musicians who entered the blues during the 1960s, starting when he was only sixteen. With a pasted-on mustache, he was slipped into black night clubs in Panama City, Florida, promoted as “That boy who sings like a man. Within a year, he started his own band. In the years to follow, he restarted several times by moving to Chicago, New York, Miami, New Orleans and, finally, California. ...