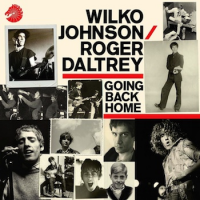 Wilko Johnson has been around for a long time. He will forever be associated with Dr Feelgood, the influential rhythm and blues band, but he has done many things since leaving the band in 1977. His distinctive guitar style, as well as his affable demeanor, have made him a bit of a national treasure. After leaving Dr Feelgood Johnson joined Solid Senders and, later in 1980, The Blockheads. He has played regularly with Blockheads bassist Norman Watt-Roy and drummer Dylan ...