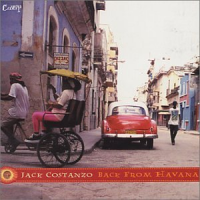 After 25 years away from the spotlight, Jack Costanzo has returned. His album features an exciting band -around 10 pieces for the most part -performing intense Afro-Cuban arrangements. Chicago native Costanzo, whose ancestry is Sicilian, has lived in Southern California since his discharge from the U.S. Navy at the end of World War II. Two years with Stan Kenton and five with Nat King Cole led to studio work, significant television and motion picture projects, and live performances as a ...