The malicious coronavirus pandemic that brought most of the world to its knees in 2020 has spawned the use of several reanimated words including “virtual," whose meaning is “sort of here but not really," as in virtual video chats, conference calls, exhibits, films and even musical performances. “Virtual" has spread its tentacles into almost every walk of life including jazz, via YouTube and other creative channels. And now, it seems, to big bands as well. Cartoon Bebop, the third album ...

Simply becuase we love that large and needed big band sound, we begin episode 612 of Neon Jazz with Dan Bonsanti leading his group of masterful musicians with their take on the jazz. From there, we zig zag around the jazz universe to show listeners where we have been and how far we are going wtih the art form. From the new cats like Lafayette Gilchrist to the sounds of Kenny Drew. We strive to give you the audio thoughts ... 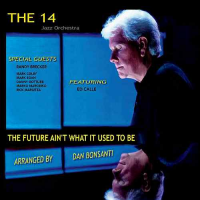 The Future Ain't What It Used to Be, the second album by South Florida's impressive The 14 Jazz Orchestra, is by and large like its precursor: swinging, straight-down-the-fairway big-band jazz underlined by leader Dan Bonsanti's admirable charts. As before, each of the songs was written by a blue-chip composer, from Chick Corea and Antonio Carlos Jobim to Wayne Shorter and Eliane Elias, and as before, every member of the ensemble is an alumnus of the University of Miami's well-respected Frost ... 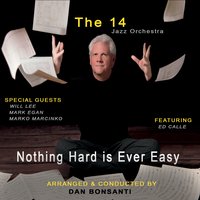 The 14 Jazz Orchestra, based in south Florida, is comprised of thirteen accomplished sidemen (all alumni of the University of Miami) and arranger / conductor Dan Bonsanti. On its debut recording, Nothing Hard Is Ever Easy, the ensemble cast its net wide to gather in compositions by Billy Strayhorn, Wayne Shorter, Joe Henderson, Charlie Parker, Chick Corea, Paul McCartney, John Scofield and Florida native Jaco Pastorius, among others, each one marshaled with rigorous care by Bonsanti. Saxophonist ...