The term “Texas tenor" was originally coined to describe the sound and style of such swing era players as Herschel Evans, Illinois Jacquet, Buddy Tate, Budd Johnson, Arnett Cobb and others, and has subsequently been applied to second generation players from Texas that included James Clay, David &#147;Fathead" Newman and Marchel Ivery. What these players had in common was a big sound and a feeling for the blues. Cannonball Adderley, in the notes to an album by Clay and Newman, ... 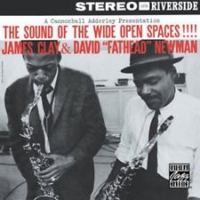 The wide open spaces referred to in the title is not a reference to free jazz, but rather a description of Texas, the home state of both Clay and Newman. Cannonball Adderley, who began producing records with this album in the hopes of giving credit to lesser-known musicians, brought together these two tenormen for what became quite a blowing session. There are no surprises here; a few bluesy originals, a couple of standards, all played at an appropriate ...