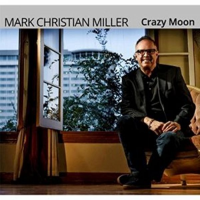 Southern California already has Mark Winkler. Some crazy critical mass is reached when considering vocalist Mark Christian Miller's Crazy Moon. Not because Miller and Winkler are so much alike...there is a bit of that, but more because they are so different. Both have performed on the Left Coast for the past 25 years, each building a dedicated following and each making a light and appealing brand of jazz vocals. Miller has a Broadway voice with jazz approach. His tone is ...

Mark Christian Miller has been performing for over 20 years, mostly in southern California. Recordings are rare, however: perhaps because he's also been working as promoter, booker, manager and festival director. Debut album Dreamer With A Penny (Sliding Glass Door) appeared in 2004; an album with Betty Bryant, Together (bry-mar music) in 2011. Crazy Moon is a welcome addition to this short list. Miller's voice--cheerful, positive--is one of the warmest and most welcoming voices in jazz. It's hard ...