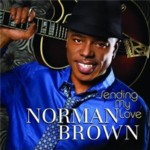 Whether to military troops overseas, family members or fans, guitarist Norman Brown has plenty of love to give. And he shows it with Sending My Love. Brown is a Grammy Award winner who has played guitar since the age of 8. Drawing inspiration from Jimi Hendrix and Wes Montgomery, and often compared to George Benson, Brown has worked with a number of smooth jazz luminaries, including Paul Brown, Kirk Whalum, Rick Braun, Mitch Forman and Michael Manson. 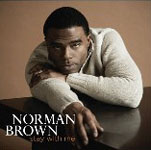 Often when Norman Brown, Kirk Whalum and Rick Braun appear on one anothers' albums, the collaboration makes for the best track on the release. That's mainly because three lead instruments are generally better than one. However, that isn't necessarily the case with Brown's Stay With Me. Brown, a guitarist and vocalist who sings as well as scats, is in that niche where smooth jazz meets R&B, old-school soul and a bit of pop. The Grammy-winning artist was ...

Norman Brown knows how to chill. And he has a way of making you chill right along with him.The guitarist/vocalist is a master of the laid-back groove, successfully bringing together elements of smooth jazz and contemporary R&B. On West Coast Coolin' , Brown consolidates his reputation as a premier recording and performing artist with a collection of ten tracks--written and co-written by the leader--that push the idea of “chillin'" to new heights.While Brown's scatting has drawn ...