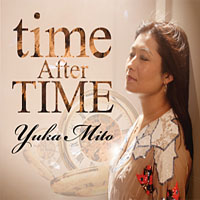 Time After Time, Yuka Mito's second solo album, shines new light on oft-recorded songs from The Great American Songbook, adding three pop tunes and one original for a tasteful project from a Japanese vocalist with a love for jazz. Now based in New York, Mito divides her performance time between the Tokyo and New York jazz scenes. A gritty contralto and ever-so-slight accent makes her approach even more unique.Latin jazz pianist Chiemi Nakai provides the arrangements for the ...