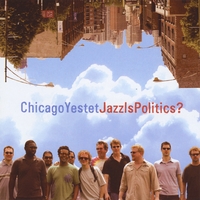 For an introduction to the Chicago jazz scene, look no further than the Chicago Yestet's line-up on Jazz Is Politics?. From drummer Dana Hall (Terell Stafford) to John Wojciechowski, a finalist in the 1996 Thelonious Monk Saxophone Competition, the roster reads like a who's who in Midwestern jazz. Staying true to the album's namesake, the Yestet opens with the “The Decider," a track featuring audio clips from former President George W. Bush speech, famously giving himself the ...