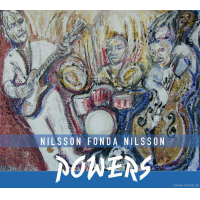 This collective trio teams American bass master Joe Fonda, known for his collaborations with innovative musicians and composers such as saxophonist Anthony Braxton, trumpeter Wadada Leo Smith and pianist Carla Bley, with Swedish brothers a generation younger than Fonda-- guitarist Anders Nilsson, based in New York since 2000, and drummer Peter Nilsson, based in Malmö, Sweden. The Nilsson brothers have been playing together since they were kids and recently collaborated in Anders Nilsson's Aorta (Kopasetic, 2009). Both lead their own ...

The late and lamented Derek Bailey has suggested that due to the current state of jazz--"a comfortable reminder of the good old days was one of his more sympathetic characterizations--a complete separation of jazz and improvised music is in effect.

Aorta's sophomore effort, Janus, makes a good case for the validity of Bailey's point. The Swedish band, centered around NY-based guitarist Anders Nilsson, immediately presents in the opening “Operation: Janus" the elements which make up its music, none of which ...