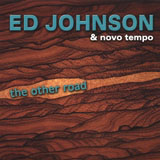 It has been three years since Movimento (Cumulus, 2004), the last album from singer/guitarist Ed Johnson & Novo Tempo, and the wait has been worth it. The Other Road , from this San Francisco Bay Area ensemble, evokes vivid memories of Brazilian samba and bossa nova music before the Tropicalia Movement introduced rock music into the menu of the first wave of bossa singer/songwriters in the early 1970s. At the same time, despite numerous re-awakenings of acoustic samba music, where ...

Ed Johnson: Over That Wave

Palo Alto resident, Ed Johnson, brings his nylon stringed acoustic guitar and his highly attuned vocal and writing skills to his 6th CD release providing more than 50 minutes of Singer/Songwriter offerings. Like many of his contemporaries, Johnson seeks to attract another generation of listeners with music that blurs the line between jazz and pop as he delivers a program of 10 tunes in very stylized vocals. Johnson sings in a reflective, gentle but earnest manner - - earnest is ...