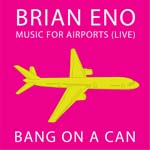 When the innovative classical ensemble Bang on a Can All-Stars released its version of Ambient music forefather Brian Eno's seminal Music for Airports (Virgin/Astralwerks, 1978) on POINT Music in 1998, it demonstrated how a composition seemingly far removed from the classical sphere could be absorbed into the legitimate canon. And although the studio version is already ten years old, the suite has remained an active part of the group's repertoire, performed as recently as last year at the Bang on ...

Bang on a Can: Meets Kyaw Kyaw Naing

As much as the Kronos Quartet paved the way for modern chamber musicians to broaden their horizons by recording genre-busting albums including Pieces of Africa , Bang on a Can has extended that road by, amongst other things, interpreting ambient works like Brian Eno's Music for Airports. Both groups, one a more conventional chamber quartet, the other a rather odd ensemble that includes guitar, bass, percussion, clarinet, keyboards and cello, have breathed new life into a stale form by expanding ...

Bang on a Can: Phillip Glass: 5ths

When the minimalist movement emerged in the mid-'60s, it was, for some, a refreshing alternative to the atonal arrhythmic music dominating contemporary classical music. With the emergence of Terry Riley, Steve Reich and Phillip Glass came a form that relied on comprehensibility and an almost hypnotic engagement, one that seemed custom-fitted for the experimental, but retrospectively musically conservative culture of the day.

Sure, it was a time for musical experimentation as rock & roll and folk music merged ...