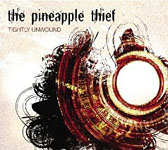 This four-piece unit sways along a thin line, where alternative rock attains a fruitful coexistence with more progressive musical elements. Founded by guitarist, keyboardist and vocalist Bruce Soord for his solo ventures, Pineapple Thief subsequently solidified its group-centric entity back in 2002. Fast-forwarding to this 2008 release, the musicians' methodology looms as a paradox of sorts. Think sophisticated pop, spiced with crunching alt-rock grooves and then toss in some strings and spacey overlays to complement Soord's endearing vocals. ...