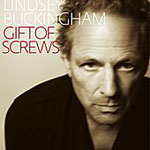 On his sixth solo album, Fleetwood Mac's Lindsey Buckingham continues his string of releases featuring slick, crisp, sophisticated wry lyrics. Unlike his last studio effort, the acoustic-based Under the Skin (Reprise 2006), Gift Of Screws features incendiary electric guitar layered over minor chords with many of the signature grooves that Buckingham (and Fleetwood Mac) built his reputation on.

Though not the balls-to-wall, electric, all-out rock record he promised would follow Under The Skin, Gift Of Screws is nonetheless ...