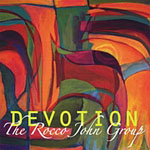 With his drifting tones and trilling bird calls, Rocco John Iacovone evokes saxophone greats including Eric Dolphy, Ornette Coleman, and Jackie McLean, and also suggests mentors Lee Konitz and Sam Rivers. All of these references used their distinct sounds to expand and reshape the musical conventions around them. With Devotion--his sixth album as leader and third with The Rocco John Group--Iacovone continues in their tradition. 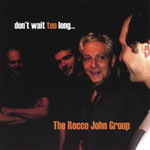 So much of the jazz on CDs these days sounds so much the same, so that when a disc such as this one is released, on which the music clearly speaks with its own voice, one must take notice. Saxophonist Rocco John has studied with Sam Rivers and Lee Konitz and his distinctly apparent ability to both compose and improvise in the jazz idiom clearly reflects the lessons learned from these masters. On Don't Wait Too Long..., ...