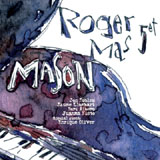 Pianist Roger Mas presents a conundrum with Mason. Here is an album expertly executed, well-recorded, and filled with technical detail, but possessing a stark patina that takes time to rub away in order to reveal the core of the music. While there are glimmering moments of improvisational fire, the overall feel is rather mysterious. Perhaps Mas' goal was to create an updated Paul Desmond-esque musical environment, and in some important ways he succeeds. To his credit, the album has a ...

Fresh Sounds is based in Spain, but has released the debut recordings of many of the best new American jazz artists on the scene today. Their intriguing business plan also focuses on local talent, which means the best and brightest of the Barcelona jazz scene.

Thirty year-old pianist Roger Mas is one-third of the Barcelona piano trio Among 3, who made their FSNT premier in 2006. Making the most of this second-chance debut, he's crafted a pastoral, lyrical, panoramic arc ...