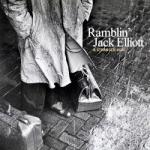 Few living artists can claim to have been mentor and model to Bob Dylan, but the man Dylan described as the King of folk singers-- Ramblin' Jack Elliott--has influenced a host of singers and story tellers from Johnny Cash and Ry Cooder to Tom Waits. Now in his sixth recording decade, Elliott returns in great voice with A Stranger Here, a collection of Depression-era blues numbers.

Elliott has carried on Woody Guthrie's folk tradition, though the blues has ...